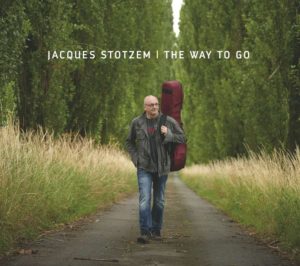 The Way To Go – New album by Jacques Stotzem

This is Jacques Stotzem’s 15th fingerstyle album and it is a triumph. In the recent past, the Belgian maestro has been concentrating on presenting his brilliant acoustic guitar arrangements of famous rock songs (Catch the Spirit and Catch the Spirit II), and he devoted a whole CD to solo renditions of the great Rory Gallagher’s songs (To Rory).  But on The Way To Go, we are back on familiar ground – lyrical, fluid and melodic Stotzem compositions.

Like all great guitar players, Jacques Stotzem has his own unmistakable tone, his unique fingerprint on the frets. He has been playing for a long time and by now has developed a real maturity. His playing never stoops to being showy or flashy and his technique serves the music, always; it doesn’t distract you with needless bravado. Jacques plays right through the note, making every single one of them count, thereby producing rich, subtle tones that serve the melody and arrangement. In this way, he creates real music not an exercise designed to show off how fast or loud you can play, the kind of thing that impresses for a moment and then is forgotten. On the contrary, Stotzem pieces evoke real musical emotions that stay in the memory. Hauntingly beautiful, the sound of his guitar lingers in the mind long after the last note has been played.

The 10 pieces on The Way To Go are a tour de force of restrained, yet deeply effective and moving fingerstyle. The tunes just get better and better with each subsequent listen. The overall atmosphere is one of lyricism and melancholy. It seems to be about journeys, physical and spiritual. Many of the titles suggest this idea: Deep Sea, A Ride On 59, Along The River and of course the title track The Way To Go, which is probably the breeziest piece on the CD. It’s saying come on wake up, let’s go, it’s a beautiful day… The opening tack, by contrast, Dreaming of A Better World, moves with marvellous melancholy to its conclusion.  The next track, Deep Sea, is a wonderful vintage Stotzem melody that rolls along as calmly and majestically as the sea itself. The achingly beautiful It’s Gone Forever is in the same vein as Dreaming of A Better World, Something to Remember and Plage d’automne, which tug at the heart strings with their wistful pensiveness. The more upbeat tunes here are A Ride on 59, The Way To Go and Musette for Edith, but I still sense an underlying melancholy in them that is the keynote of this collection. For instance, in A Ride On 59 there is a passage, after the main theme has been recapitulated a couple of times, where the colours go darker as if the ride turns down a shadowy street before bursting into the sunlight again. In a Break In The Clouds the rhythm and harmony make us feel how clouds break allowing us to glimpse blue sky once more. The last track, Along The River, flows beautifully and so this excellent album ends on uplifting notes… up there, just around the bend the sun sets on a perfect day.

If you appreciate fine acoustic music, peerless playing and perfectly constructed compositions, this music has the power to move you. The beauty and transience of our world are perfectly captured within these 10 inspiring guitar pieces. So if you want to hear a player at the top of his game – no showing off, no false notes, compositionally astute and technically assured – then The Way To Go is surely the way to go!

Visit this link to hear 40 second clips of each track on the album.