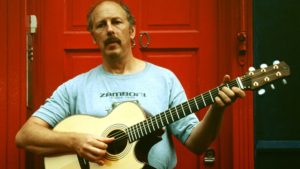 Duck Baker doesn’t need much of an introduction to anyone acquainted with the art of fingerstyle guitar. He’s been around on the picking scene for a little short of forever. His playing encompasses a wide range of genres and styles: jazz, blues, gospel and folk of various flavours, including Appalachian, Scottish and Irish tunes. In the featured video Baker spins some real fingerstyle magic with a beautiful and expressive rendition of Pretty Girl Milking a Cow. (For something completely different, check out Judy Garland’s big band version here.)

Apart from being an accomplished player, he is also an astute writer on subjects musical, and luckily for us woodshedders a marvellous teacher who passes on the torch with great wit and wisdom. To this day, players still torture themselves with an exercise he came up with called The guitar is not your friend. You can find it in an offering from Stefan Grossman’s Workshop, the aptly titled Guitar Aerobics. If you’re having trouble hooking your thumb over to fret bass notes, this is just the ticket. There are tons of Duck lessons out there in books, on DVDs etc, and you can google the vaults in a trice. Here’s one I like: how to play Mississippi John Hurt’s Make Me A Pallet On Your Floor, a wonderful piece of ragtime in the essential key of C. It’s from Classic American Folk Blues, a DVD you can find here. The YouTube video is here.

A fan recently said of him, ‘One of the greatest fingerstyle guitarists that has ever lived…period. His body or work is stunning.’ That pretty much sums it up for me. He has influenced a great number of modern fingerstyle players, including someone close to the AGW fold – Tim Sparks.

Curiously enough Duck Baker now resides in Reading near London in the UK, a somewhat different environment to his roots in Richmond, Virginia. From here he continues to fly the flag for fingerstyle, writing, playing and giving workshops. For details visit his site – duckbaker.com